Here we explain what the scheme is, how it works and how it compares to childcare vouchers. The childcare vouchers scheme closed for new sign-ups on 4 October 2018. You can however still use them as long as your employer provides them. With this in mind, this guide has been left largely as it was.

Tax-free childcare is a Government-backed scheme which helps parents with the cost of childcare. The scheme, which launched in April 2017, gives eligible families an extra 20% towards childcare costs. Not everybody will be able to take advantage straightaway so here’s what you need to know so far…

Which scheme is better for you – vouchers or tax-free childcare?

Childcare vouchers allow you to pay for childcare from your PRE-TAX salary.

If you were signed up for vouchers before the scheme closed, you can continue to get them as long as you stay with the same employer, and it still offers the vouchers.

Whether you’ll be better off depends on how much you earn, how much tax you pay, and how much you pay for childcare. Here’s our handy infographic to help determine which scheme is best for you: 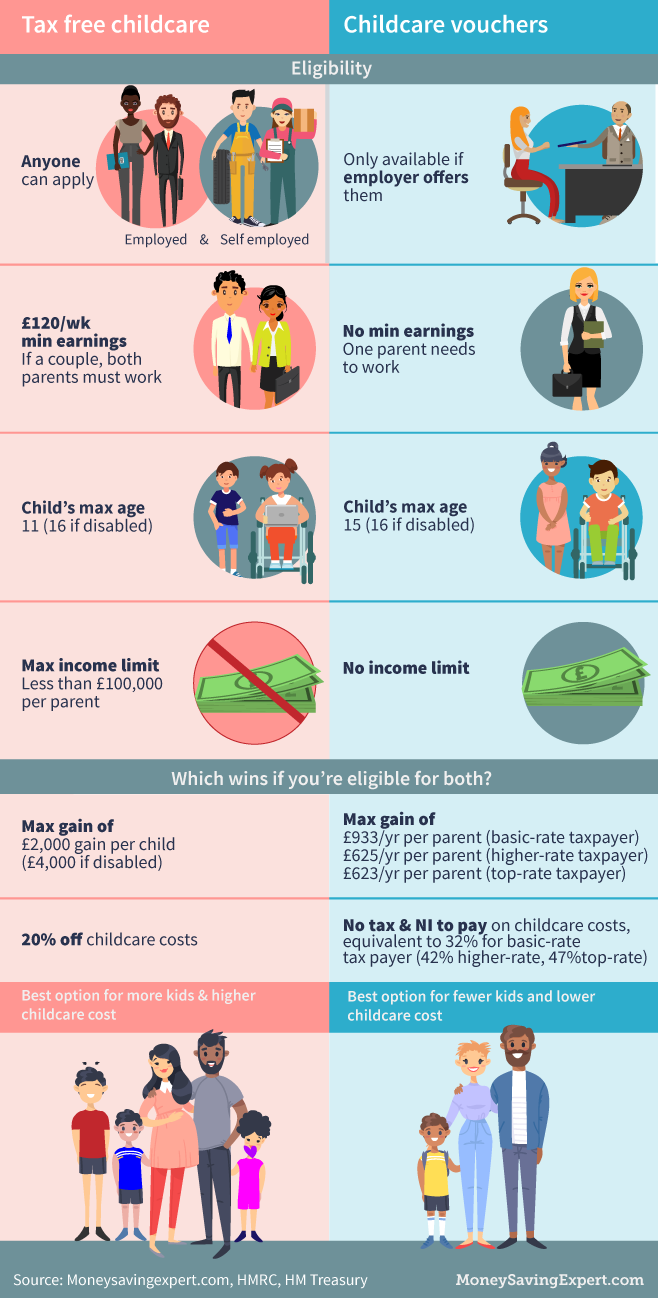 So who are the winners and losers under each scheme?

See where you fall under the tax-free childcare scheme:

Self-employed people or couples who earn less than £100,000 each, as they’re eligible for tax-free childcare, but didn’t qualify for childcare vouchers.

Couples where one parent doesn’t work, as they’re not eligible for tax-free childcare unless the non-working partner receives a qualifying benefit, but the employed parent could still be getting childcare vouchers.

Higher earners, as anyone earning £100,000+ (or in a couple where one earns £100,000+) isn’t eligible for the scheme, whereas these high earners can get childcare vouchers.

Example 1. Low childcare user
Olly Onechild and his wife spend £500 of childcare across the MONTH for after-school clubs and pick ups.

If both are basic-rate taxpayers using vouchers, this would cost them £344 – a saving of £156 compared to not using them.But if they used the new TFC scheme, it’d cost them £400 – £56 more expensive than vouchers.

If both are higher-rate taxpayers using vouchers, this would cost them £396 – a saving of £104 compared to not using them. And if they used the new TFC scheme, it’d cost them £400 – £4 more expensive than vouchers.

Example 2. High childcare user
Molly Muchcare and her wife have two toddlers and spend £2,000 of childcare (in total for both toddlers) across the MONTH for nursery and pick ups etc.

If you want to break this down even further we’ve produced a table looking at different family circumstances to see which scheme is the winner. We’ve examined savings at a level of £10,000 childcare costs per child per year, and assessed who’d win and under which scheme…

If your childcare costs are lower than our worked example of £10,000 per child, or you want a personalised assessment, KiddiVouchers (a company providing childcare vouchers) has produced a Tax-Free Childcare Calculator to help you work out which scheme works better for you. Do note that it requires some personal information.

What to do if tax-free childcare is better for you

What to do depends on whether you’re already signed up to childcare vouchers, or you’re only planning to sign up.

I’m already signed up to get childcare vouchers

If you’re already signed up to the childcare vouchers scheme with your employer, then you can continue claiming them until your employer stops offering them, or you change jobs.

If you want to move over to the tax-free childcare scheme, you just need to apply. Once you’ve successfully applied, you’ll need to give your employer written notice that you want to permanently leave its voucher scheme This needs to be done within three months. The easiest way to do this is call your voucher provider direct and ask it to stop your membership of the scheme.

How each company scheme deals with this may vary hugely – feedback so far has been limited. Some firms may not have anticipated demand to leave the voucher scheme, with staff struggling to be helpful. Others don’t appear to have a clear voucher refund policy for those who bulk bought in advance but now want to switch to the Government alternative.

I’m not signed up to any scheme

It’ll simply be a case of making sure you sign up to the new Tax-Free Childcare scheme.

What to do if childcare vouchers are better for you

If you’re already signed up, you don’t need to do anything. You can continue claiming them until your employer stops offering them, or you change jobs.

Preschool Nursery Childcare and the importance of Water The benefits of healthy eating are continuously promoted and discussed but what about healthy drinking? Practitioners are very conscious about the need to support and encourage healthy eating in pre-school nursery childcare. Whether it be through a nutritionally balanced menu, cooking activities or role play. However some […]

Pre-school Nursery Baby Reflux What is baby reflux? Baby reflux is when a baby brings milk back up during, or just after, a feed. Reflux is very common and it effects around 4 out of 10 preschool nursery babies under a year old. It usually starts before the baby is 8 weeks old and usually […]

Keep your Preschool Nursery children entertained using everyday items The warmer weather brings hopes of freedom and fun. But with lockdown still upon us for the next few months, it can make freedom seem a long way off and life with a little one very challenging! Thinking of continual ways to entertain our pre-school children […]

Preschool Nursery Children and the effects of COVID19

Looking for a nursery or pre school near me or a private pre-school that accepts children from any of the following areas:
We cover: Kenley, Sanderstead, Coulsdon, Warlingham, Riddlesdown, South Croydon, Whyteleaf, Purley, South Croydon.
Abbey Wood Grange is a highly rated local nursery we accept the governments free day care 15 / 30 hours allowance.
If you are looking for a local nursery come and take a tour of our pre school and meet our staff.